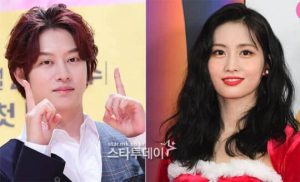 Shortly after reports surfaced that Super Junior’s Heechul and TWICE’s Momo have broken up, representatives from both Label SJ and JYP Entertainment have stepped up to release official statements.

A representative of JYP Entertainment issued a short statement on July 8, relaying, “After confirming [with Momo], it’s true that they have parted ways.”

A representative of Label SJ also released the following: “After confirming [with Heechul], it’s true that they have parted ways. However, please understand that we cannot reveal more specific details regarding the issue, as it is a matter of the artist’s privacy. Thank you.”

After admitting to their relationship back in January of 2020, Heechul and Momo have decided to part ways after a year and a half.